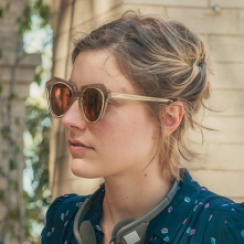 Greta GERWIG (1983, USA) studied English and Philosophy at Barnard College, where she also wrote plays and founded an improv group. She intended becoming a playwright, but began working as an actress after meeting Joe Swanberg, who cast her in his film. With him, she also co-directed her first film, Nights and Weekends (2008). Gerwig is an acclaimed actress and co-wrote films in which she also acted, such as the award-winning Frances Ha (2012) and Mistress America (2015), both with director Noah Baumbach. Her solo debut as a filmmaker, Lady Bird (2017), won two Golden Globes and earned five Oscar nominations. Although her career as a director is barely under way, both her screenplays and roles usually depict women growing up and trying to come to terms with family members and friends.