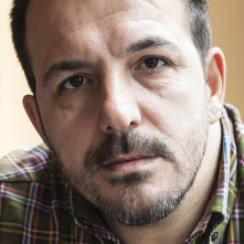 Gürcan KELTEK (1973, Turkey) studied Film at Dokuz Eylül Üniversitesi, faculty of Fine Arts. His short film Overtime (2012) was selected at several festivals, including Vision Du Réel and DOK Leipzig. He then made a medium-length film, Colony (2015), which premiered at FiDMarseille. Keltek’s first feature film Meteorlar/Meteors (2017) had its world premiere at the film festival of Locarno. The experimental Turkish-Dutch co-production blends together elements of documentary and fiction, and is a reaction to the political situation in the Kurdish region in Anatolia. The short Gulyabani (2018) premiered at Locarno.