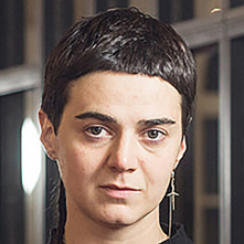 Elene NAVERIANI (1985, Georgia) studied Painting and Multimedia at the State Academy of Arts in Tbilisi and holds a Master's degree in Critical Curatorial Cybermedia. Naveriani's visual work has been exhibited in over 15 shows since 2005, including an exhibition at the Cobra Museum of Modern Art in Amstelveen. Her first feature, I Am Truly a Drop of Sun on Earth, was nominated for an award at the Solothurn Film Festival and had its international premiere at IFFR.