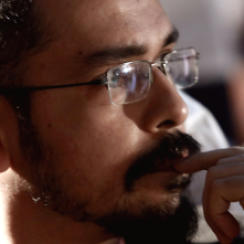 Devashish MAKHIJA (India) is a filmmaker, screenwriter, writer and poet. He began his career as an assistant director on Indian films, such as Black Friday (2007). His first short films were awarded in India, his third short film Absent (2016) had official selections in Toronto and New York. With his second feature film Ajji/Granny (2017), he won the Fresh Blood Film Award at the Beaune International Thriller Film Festival.