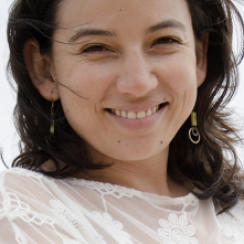 Cristina GALLEGO (1978, Colombia) is a producer, editor and director. After completing her studies in film and marketing, she worked as a producer of educational and cultural television at the National University of Colombia. Together with director Ciro Guerra, Cristina Gallego founded Ciudad Lunar. The company produced several acclaimed feature films. Gallego and Guerra were nominated for an Oscar for their efforts on El abrazo de la serpiente/Embrace of the Serpent (2015). The duo's feature Pájaros de verano/Birds of Passage (2018) has taken home a number of awards, including Best Film in London.