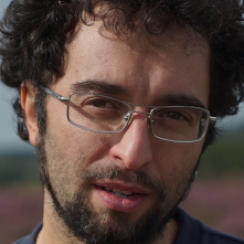 Chico PEREIRA (1979, Spain) grew up in Almadén and was educated in Film and Media at the Scottish Screen Academy in Edinburgh. After making several short films he had his feature-length debut with his graduation project Pablo’s Winter, about a retired mineworker. The documentary won several prizes at IDFA and Leipzig DOK festival. Donkeyote (2017) is again situated in Pereira’s  country of birth, with another wilful elderly man as the main character.