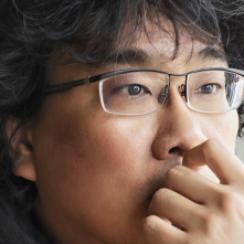 BONG Joon Ho (1969, South Korea) studied at the Korean Academy of Film Arts. His graduation film, Incoherence, was a cult success. In 1998 he wrote the script for Chun Min-Byung's Phantom, the Submarine, an enormous hit in Korea, before making his feature debut with Barking Dogs Never Bite (2000). His second feature, Memories of Murder (2003), which was also shown in Rotterdam, was one of the biggest box-office hits in Korea. He repeated this success with his next feature, The Host (2006). Mother (2009) screened at Cannes' Un Certain Regard and IFFR. Snowpiercer (2013) was his most high-profile project at the time, starring Chris Evans, Ed Harris and Tilda Swinton. Okja (2017) earned him his first Palme d’Or nomination and was released on Netflix. Parasite (2019) premiered at Cannes, where it received an eight-minute standing ovation and became the first South Korean film to win the Palme d'Or. It also became the first Korean film to be nominated at the Golden Globes.