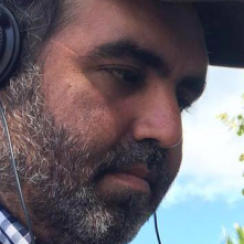 Alejandro ANDÚJAR (1980, Dominican Republic) studied Social Communication and Journalism. In 2004 he graduated from the International Film School of San Antonio de los Baños, Cuba (EICTV), where he specialised in screenwriting. He returned to the Dominican Republic in 2008, where he directed the short documentary A Day at the Market. He is founder of the production company El Balcón Producciones, where he has worked as a screenwriter and script consultant. In 2014, he founded and directed RDOC, the first documentary film festival in the Dominican Republic and the Caribbean. The Watchman (2017) is Andújar’s first feature film.