“I remember seeing him naked, with the machete in his hand” recounts Tatiana Huezo of a childhood memory she uncovered to set the tone for her fiction debut, Noche de fuego. When she was around 10 years old, she moved back to the country of her birth, El Salvador, which at the time was at war. She remembers being hidden underneath her bed by her father when soldiers came to their house. “He looked so vulnerable. It was three o'clock in the morning. He came out, he put us under the bed and asked us to hide.”

This moment of dread is conjured to form the opening moments of the film, where we hear the anxious breaths of Ana and her mother digging a hole in which she can hide from the cartel men. “It's an image that I had already forgotten and that came back with this movie as if I was looking for this feeling of fear.” Fear cloaks the entire film like the sickly black paste scraped from the hillside poppy flowers by local labourers. Anxiety defines the lives of the young girls and their mothers, often left without fathers who migrate elsewhere, but its exact source – be it the local gangs, the military, or the helicopters dumping clouds of toxic chemicals on their village – is often a bit more ambiguous. It's simply the daily violence of growing up in the rural state of Guerreo, Mexico.

“I'm not willing to make concessions.”

“What does it mean to be a woman in a violent context? That was the heart of the film,” says Huezo. “Not the narcos, the danger, the abduction of the girls. It was there, but for me it was like a pretext.” Narco violence, like that of Colombia and Escobar, is prone to the kind of festishistic take that does little to speak against this merciless cycle, like much of the easy good-vs-evil takes on the war on drugs. “As a storyteller, I'm not willing to make concessions, to be told that everything has to be simpler, clearer, easier, because I'm not interested in those films. That cinema doesn't interest me and I don't care if it reaches the public or not.” Instead Huezo invokes a harrowing sympathy for the three girls – Ana, Paula, and María – who grow up in this context. “The spectator should walk with the girls, should love them, should laugh with them, should accompany them on this journey.”

As poison drifts in from the sky, the landscape itself strains and cracks with explosives blowing open the rock at a nearby mine. “I feel like the whole movie has a tension of knowing that there's a monster that's out there,” says Huezo. “I told Nicolás [Celis, the film’s producer], I want there to be a mine and I want there to be a big explosion. I want to appear as a monster that devours the mountain little by little. That's not in the book.” The film is based on Jennifer Clement’s novel of the same name from 2012, which Celis offered to Huezo after acquiring its rights. “Nicolás asked me if I wanted to venture into directing my first fiction. And the truth is, no, I hadn’t thought much about it.” 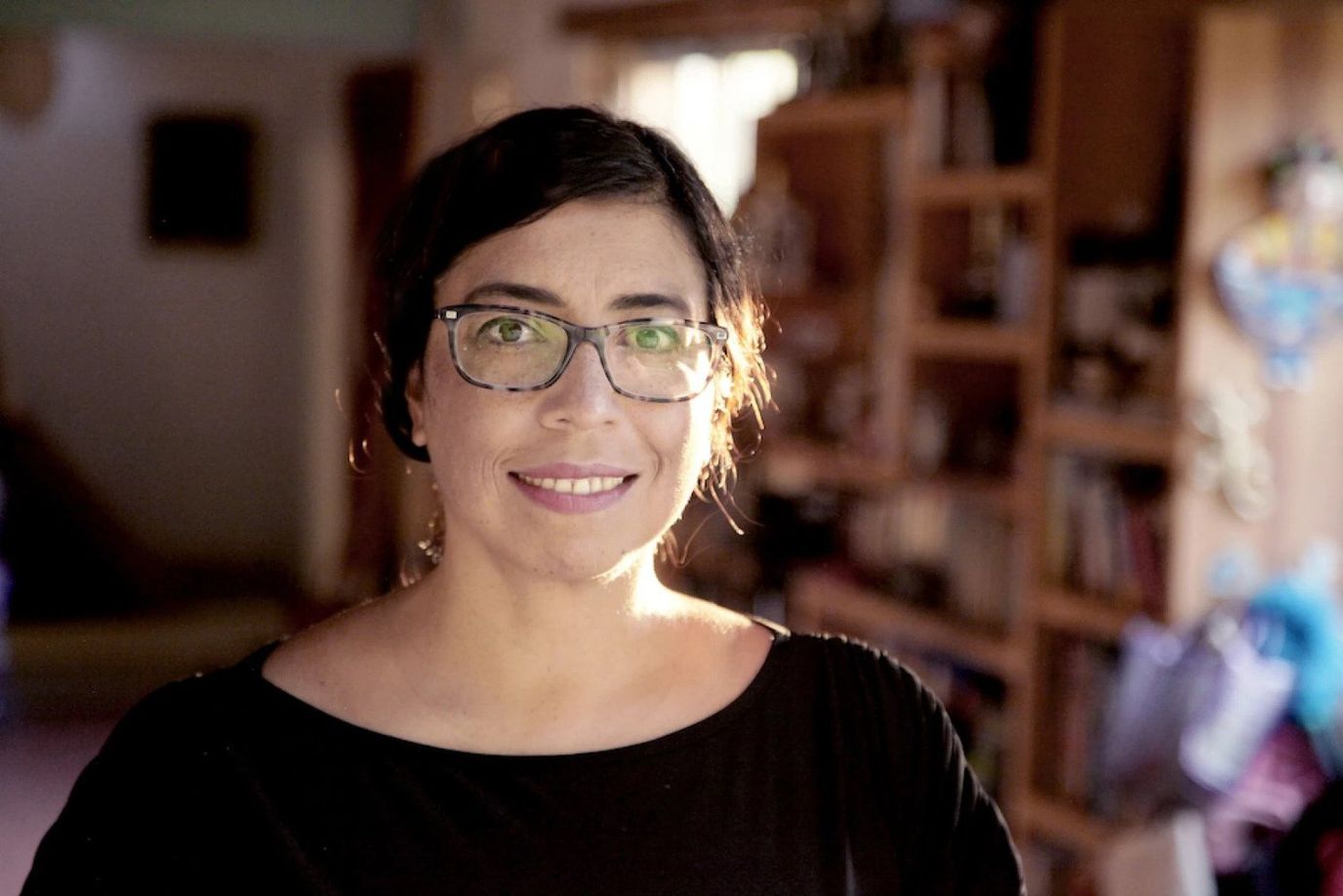 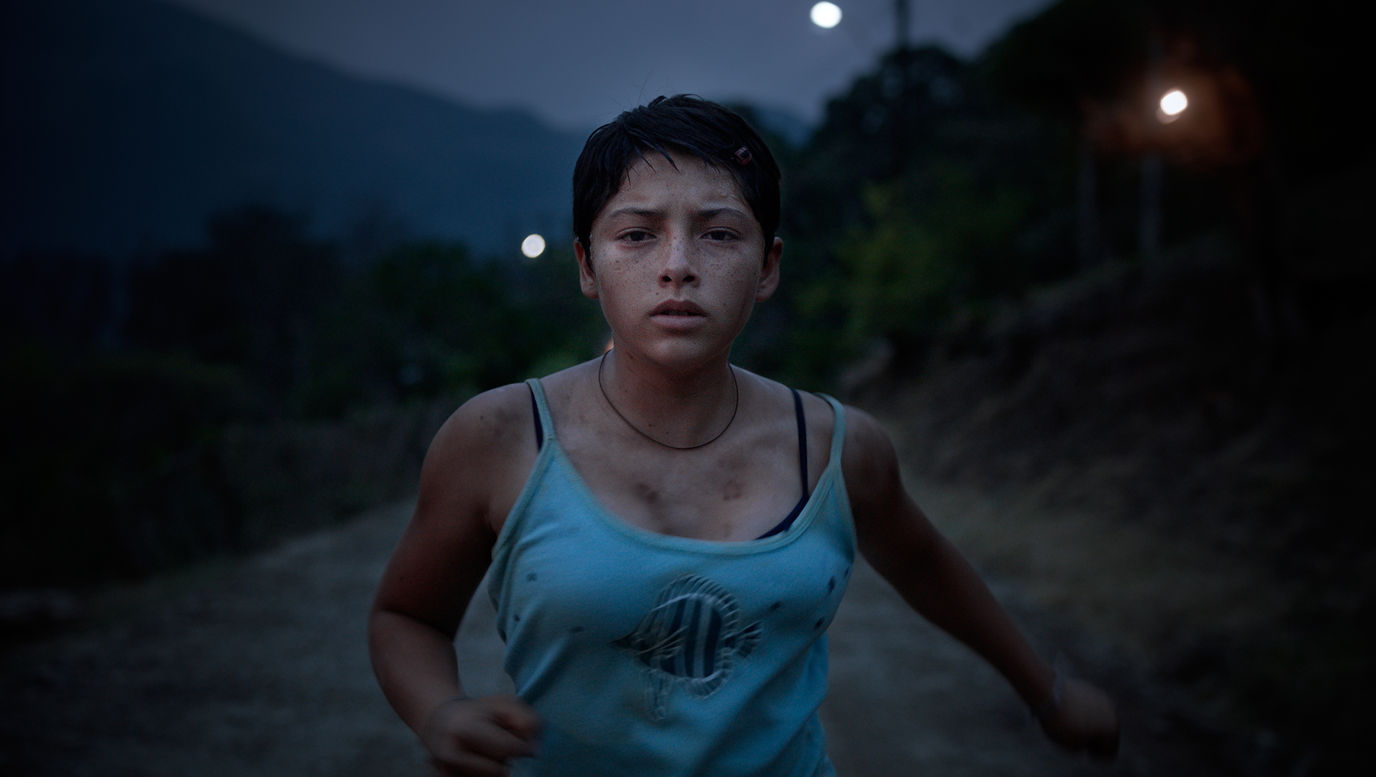 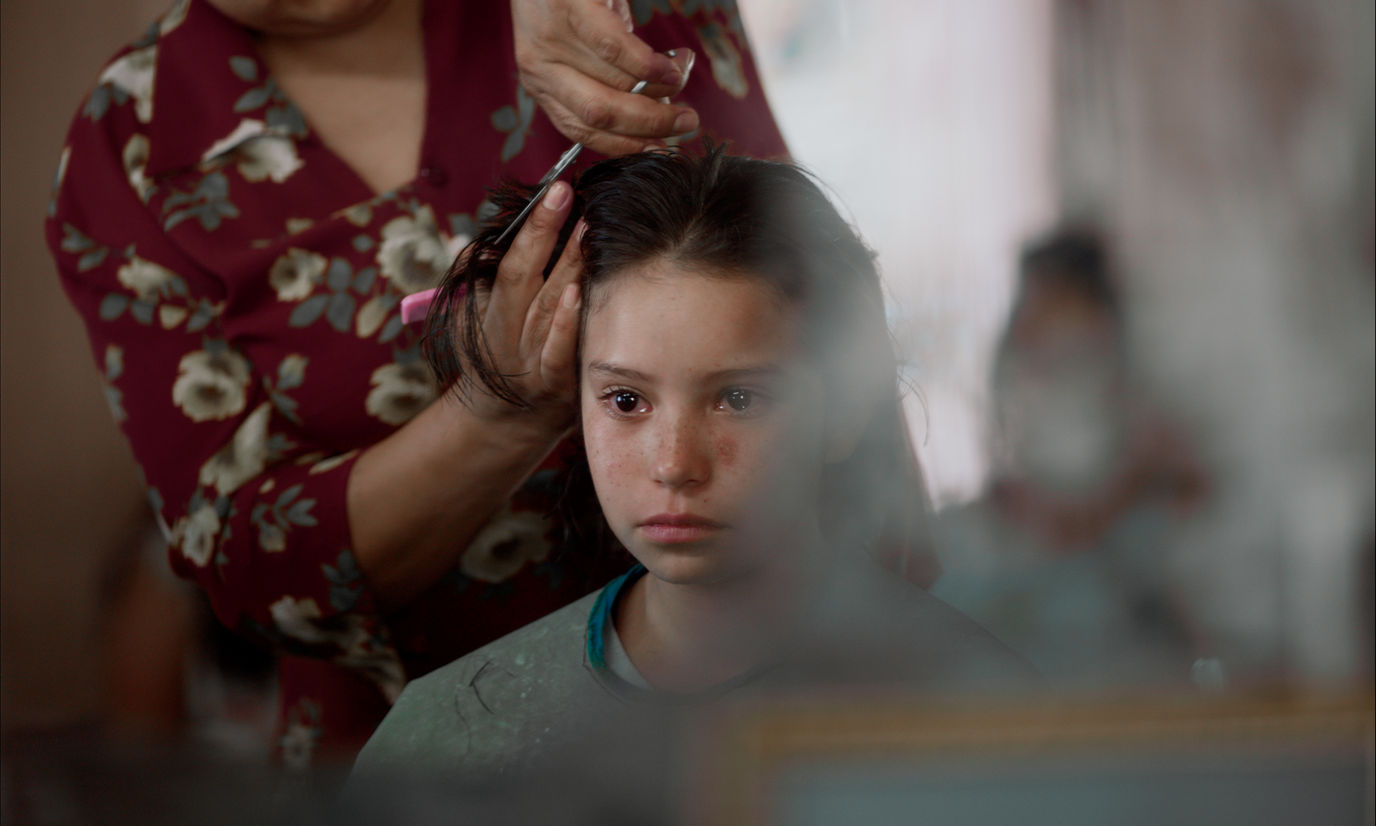 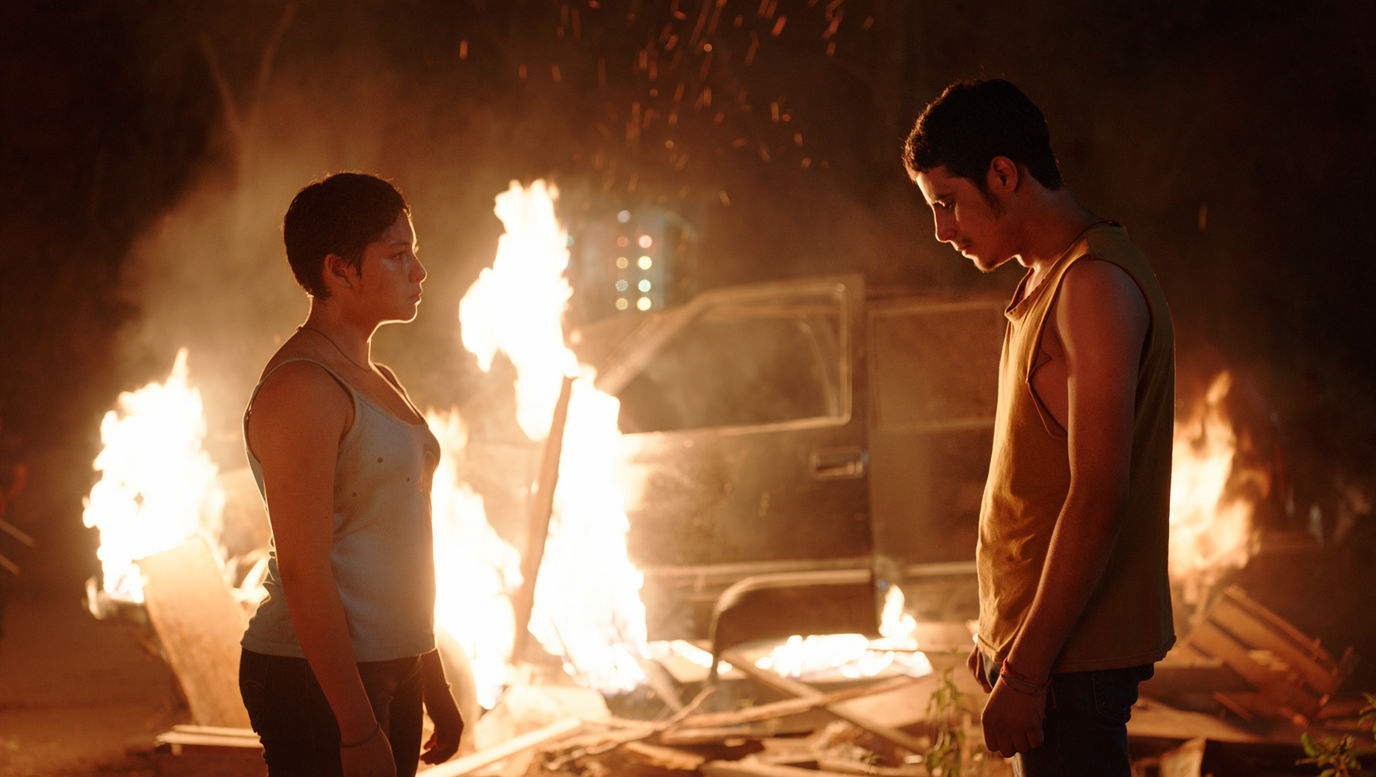 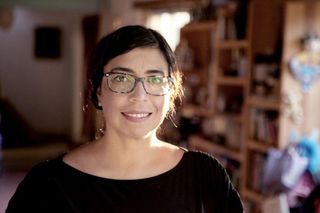 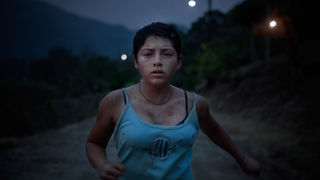 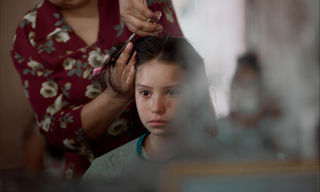 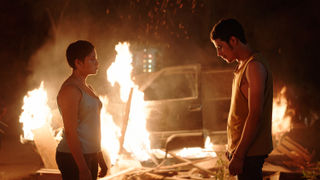 “Documentary gives you an instinct for improvisation.”

Huezo, born in El Salvador and raised in Mexico, had already been researching the area for a documentary she’d been developing, so in the end it seemed like the perfect opportunity to step into fiction filmmaking, after a career made from award-winning socially committed documentaries including El lugar más pequeño (2011) and Tempestad (2016). The transition to the world of fiction, it turned out, wasn’t particularly abrupt. “Documentary gives you an instinct for improvisation” she says, as well as the dramatic construction which she used throughout her non-fiction work.

The use of non-actors was also familiar territory for Huezo. “I thought it was much more interesting to start from their own identities.” Six actors played the three chracters, because of the two moments in which the film is set. They had three months of preparation together with Brazilian acting coach Fátima Toledo who prepared them for the intensity of the shoot. “I decided not to even tell them which character was who or if there was a leading lady. That’s the documentary approach, finding that richness in the characters, kind of extracting what's already there latent in them.” Their experience brought them very close to one another. “They became best friends, they told each other their secrets and all that was very important.”

The challenge was, instead, a practical one in adapting to the scale of a fiction set. “When I arrived at the shoot they prepared a monitor and a chair that said director on it, and they told me this is your place,” she complained. “I don't know how to direct from a monitor in an armchair, I need to touch things, move them around. I had to adapt to this enormous apparatus in fiction, but that apparatus also had to adapt to me.”

The adaptation turned out to be a triumph. At Cannes in 2021, the film received a 10 minute standing ovation followed by a special mention from the jury of Un Certain Regard. Netflix then acquired the film for North America, Latin America and most of Europe, with MUBI also buying a stake. The film premiered to Mexican audiences with a screening at Los Pinos, the former presidential residence in Mexico City, where two and half thousand visitors watched the film for free with a concert afterwards.

“The money from the Hubert Bals Fund and the other funders was instrumental in being able to get the production to where I needed to take it.” IFFR supported the film with funds from the HBF+Europe: Minority Co-production Support scheme, with which it works with Creative Europe to stimulate European minority co-production. Where she took the film, with the help of an experienced acting coach and special effects, was a shocking indictment of violence and its complexity in Mexico, using personal experience and the real lived experience of the brilliant child actors to give a heart-wrenching intensity to her fiction debut. “I say I don't make films for Netflix, I make the films that I'm interested in. And whoever wants to join that, they’re welcome.”

Projects by Payal Kapadia and Truong Minh Quý are the latest to be supported by collaborative scheme.

Read an extract from our anniversary publication, with Thai director Apichatpong Weerasethakul. .