The theme of the 2020 IFFR Reality Check conference was originality,

The theme of the 2020 IFFR Reality Check conference was originality, in terms of production, delivery methods, financial structures, working as a collective or in the championing of new and original voices. And originality as a way of differentiating the independent aesthetic from the increasingly oppressive monolithic culture.

Outgoing film director Bero Beyer opened the conference with a recognition of the energy in the room and a reflection on his past 5 years in charge. There has been a monumental change in the industry. The floodgates have been opened. It took pain, it took scandals but we can never go back to how it was. This is a tremendous and fundamental change.

"The amassing of capital taking on huge power in the industry will always come at a cost. The big players …will control everything… and if we are not careful, we will all be on the same drug of content that we get on a daily basis on all of our screens. It means that the niche has to be fought for. It has to be enlarged. It has to become the norm somehow."

"When we discuss the concept of originality today, let’s make sure that somehow these thoughts become the norm, become the way that we perceive cinema, that we treat each other so that we can have the International Film Festival Rotterdam atmosphere throughout the year, throughout the continents, celebrate cinema and love each other as human beings."

In a keynote entitled Originality in the Face of Monoculture (an address that he freely admitted was doom-laden) academic Dan Hassler-Forest discussed the implications and effects of the monolith brands and global tentpole movie franchises on contemporary society and culture.

Early in his address, he explained how he got into trouble for going public with his amusing idea of The Lion King as an example of fascist ideology, originally suggested to students to rid them of any preconceptions that Disney is an innocent family company.

When a story was published in The Washington Post he received a tsunami of criticism, that a "flaky, weird Dutch American" was considering this national treasure to be fascist. It was seen as proof that the Left had lost its mind. But it served as a reality check for Dan too. He realised that most people wanted to defend Disney against the very idea that you might accuse kids’ entertainment of being in any way political. 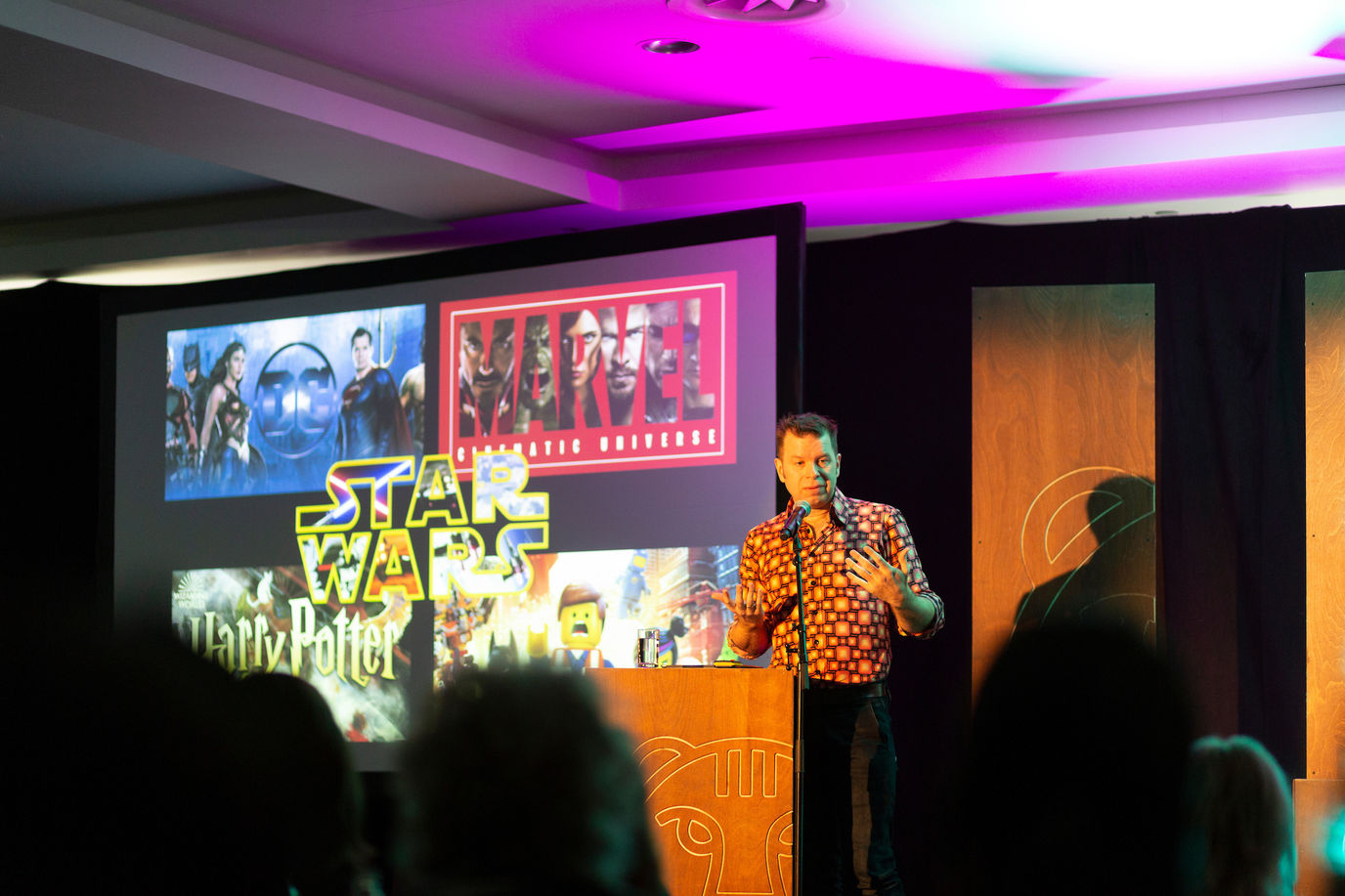 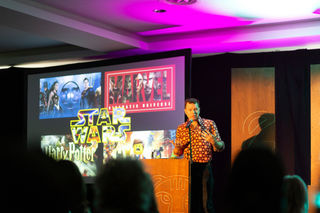 He went on to explain and demonstrate, in graphic detail, the current stranglehold of Disney, even within the vastly powerful mega-conglomerate global entertainment market. "[In 2019, up to September] Buena Vista, which is Disney, made almost $3 billion with ten movies, whereas the number two at that point, Universal, had made a third of that amount with 19 films… These films are not just blockbusters, they are black holes that suck everything else around them into their orbit."

As a corrective, Dan offered the example of Lulu Wang who, as an independent filmmaker with a professional brand that she wanted to both develop and protect, held out when she was made a substantial "double offer" by one of the huge streaming platforms. She said no, it wasn't about the money. The result? Her US 70% Mandarin-subtitled film is still in cinemas after 4 months. Had she taken the bigger money, they wouldn't have had the energy to support her as well as the other esteemed and established directors on their roster.

"If I get a good offer from a streaming platform what does that mean? Do I take the money? But what does that mean for an unknown filmmaker? Scorsese can pitch The Irishman and 18 million people will watch it on the first weekend... Obama can do that, but if you’re not Obama or Scorsese it's a whole different thing."

Another thing to do is simply not try and play that game, Dan said. Why be a competitor when you can think of yourself as part of a collective film culture? Not to think of yourself as a filmmaker who wants to get his or her name out there. Rather, "I have stories to tell in a way that can build community, let voices be heard, and [let’s] find ways together to distribute them." 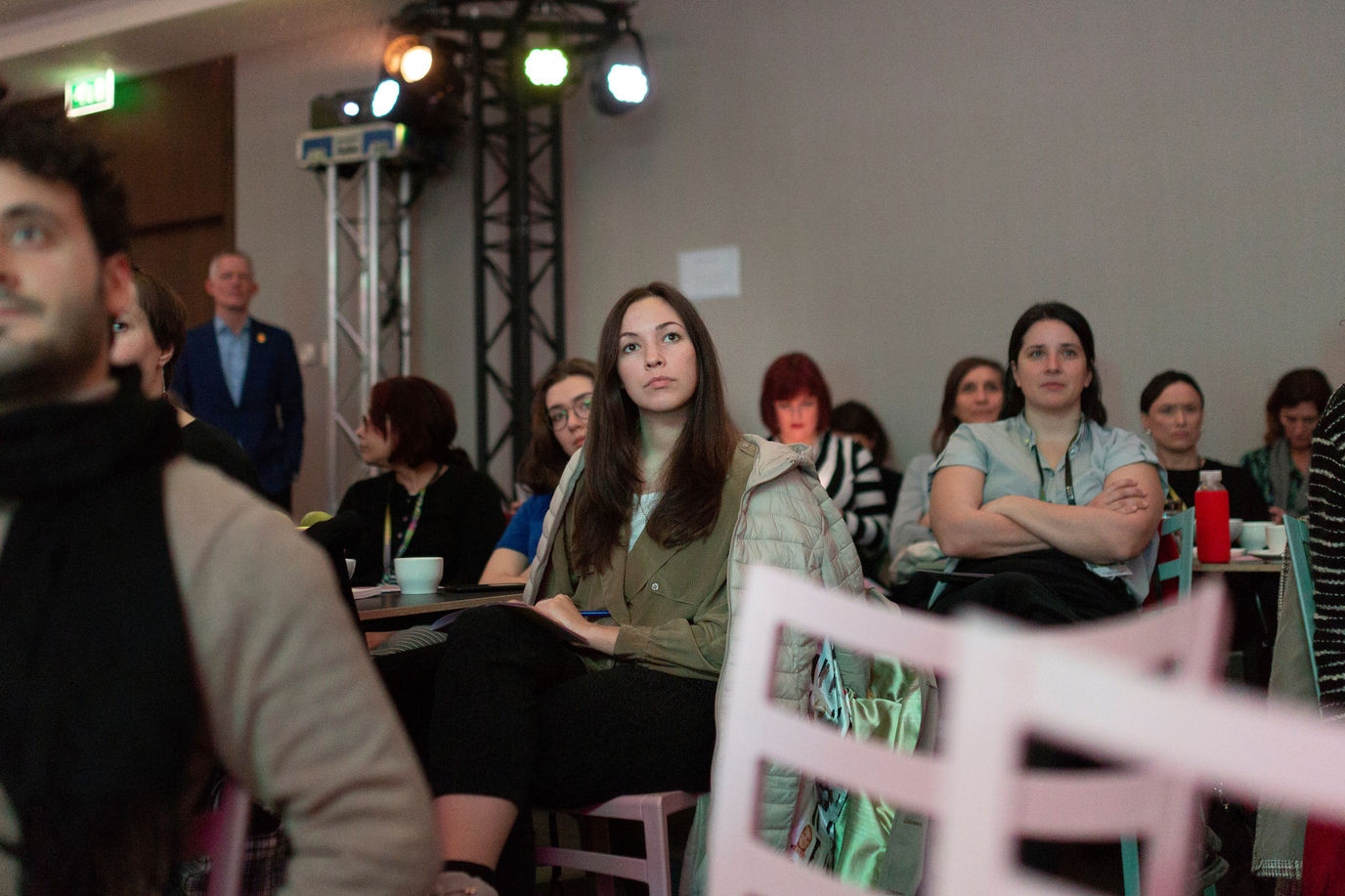 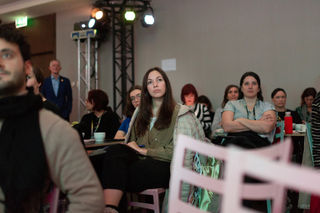 The Discovering & Championing of New Voices

Nathan outlined how he sets out to attract new filmmakers. It’s important to be in that space of research and development. "Talented debut filmmakers is something very important to support.… We find them at film festivals, when visiting countries worldwide, and we get recommendations from artistic directors and acquaintances."

Moderator Wendy asked whether Jessica and Nathan think that the barrier to entry into filmmaking has become lower, given that anybody can shoot a film on their iPhone these days.

"Even though the barriers are low, you still need to make something good to get you there," replied Nathan, stressing that industry standards haven't changed in that respect.

Jessica responded: Having moved away from 35mm/film/processing, the cost had come down for first-time filmmakers. Working in a collective like Ghetto film school is awesome, too, it makes it easier to access equipment and share resources. I think it’s easier to make something, and I always tell young college-age filmmakers, just make it. Figure out your craft, find your voice, get it out there.

Freelance film and distribution consultant Beatrice Neumann chaired the next panel, which looked at how filmmakers around the world are increasingly experiencing the power of the collective. Angolan Jorge Cohen (Air Conditioner, IFFR 2020), Brooklyn-based Terence Nance (An Oversimplification of Her Beauty, IFFR 2012) and Hafiz Rancajale, from Jakarta each, took a moment to discuss their working and business models, before widening the discussion. 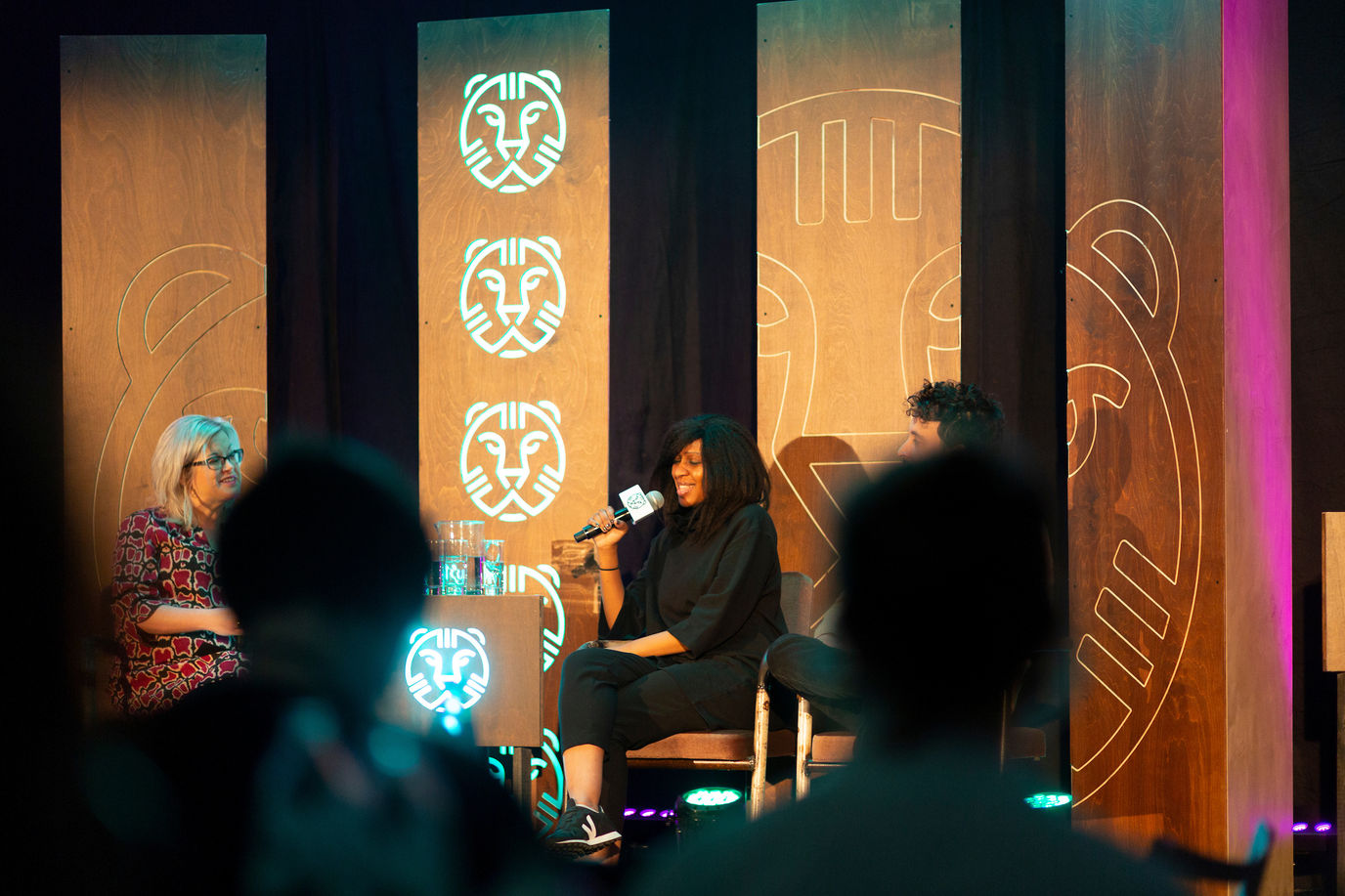 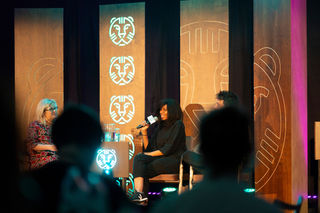 "One very important thing to do when you are working in a collective is to revisit your purpose often," said Jorge. "When we are saying that we work as a collective, that doesn't mean that everyone is a director. The director of one movie will be the editor of the other one and will help out in playing different roles depending on the projects. We decide on the projects together."

"A collective is always the default position," pointed out Terence. "Nobody would choose to do anything alone. In making music videos and films inspired by music, a lot of musicians have the popular idea to get a bunch of filmmakers together. I often get asked to work that way, because I think there is an energy around that dynamic. There is sustainability in making sure there are enough hands to do all the work."

Hafiz (one of the founders of the Ruangrupa as well as the founder of Forum Lenteng) described how the group trumps the individual in his collective. "Working in Indonesia it is easier, as you trust your friends. After the military regime stepped down in 1988, artists decided to make friends not art," he said. "But many friends can then create new art together. That is ideal."

Lorna wanted to know from Gavin what NOWNESS was all about. "We do exclusive online premiers of three films per week on Mondays, Wednesdays and Fridays, a mixture of films that people send, they can fiction, documentaries, from record labels, music videos, cultural institutions. We get about 50-60 films sent to us per week," he said.

The company also makes 60 films per year, such as profiles of high-profile people in the arts and culture, and thematic strands. The company also provides bespoke films for companies at events to complement and augment the clients' 360 campaigns. They work with brands to pay the salaries, says Gavin.

Anurag discussed his involvement with MyNK and why he turned to blockchain as a mechanism for film finance. "There is a whole lot of mainstream [interests] in India that is always trying to push aside indie films. There are a lot of things that we face as filmmakers, including piracy and lack of transparency, and blockchain solved those problems."

This panel was illuminating and surprising in equal measure. Alexander Porter of Scatter and director Hannah Jayanti discussed volumetric storytelling, a movement within AR and VR content using 3D scanned imagery. They discussed their creative approach to non-fiction in feature documentary Truth or Consequences, finding a unique way to engage the depicted community in the process.

Alexander explained what volumetric storytelling is all about. "It is three dimensions, using the world as our source and our inspiration, so deriving materials directly from the world and putting those into VR or AR 3D spaces."

Hannah's response was surprising, seemingly at odds with her partner’s appreciation of the whole VR vibe.

"I have to say that I have what I consider to be a very healthy scepticism about virtual reality, and I am very surprised to be working in this medium," she said. "I think part of it is that I am very frustrated with traditional documentary filmmaking. I just think, more often than not, that it is pretty reductive, and usually based on narrative structures which are quite often adopted from fiction films." And what does volumetric offer in their community-based documentary? "I think it does a couple of things", Hannah answered. "It is a very strange associative space. I think it sets you into a point of view that is not necessarily 'now'. I think it a contemplative space."

Fireside Chat: Who does storytelling belong to?

Rowan got straight to the point, wanting to know about the politics of authorship and who has the right to tell which story, given that the director Sarah is an older white woman telling a story about youth and race. "I think there is an ongoing conversation and I don't think there are clean or neat answers to that conversation, and it’s something that should be interrogated and given time. That's why this project had to be a collaborative process, including the girls and their extended communities and family as part of the development process. I think including more voices gives you a richer version of the story and a more truthful reflection of that world."

"I think that there is a real responsibility of filmmakers and storytellers to recognise the shoulders that they stood on in order to get to that place, but also then to be everything they can to be the shoulders themselves," expresses Anu. "We had lots of conversations with Sarah about the capital she has in the industry, that some of the other creatives involved, including myself, don't have. She can use her position of privilege and her experience and contacts to wedge the doors open. I think there is the responsibility of anyone who is in that position of privilege to acknowledge and act on that, particularly in this industry and within this context."